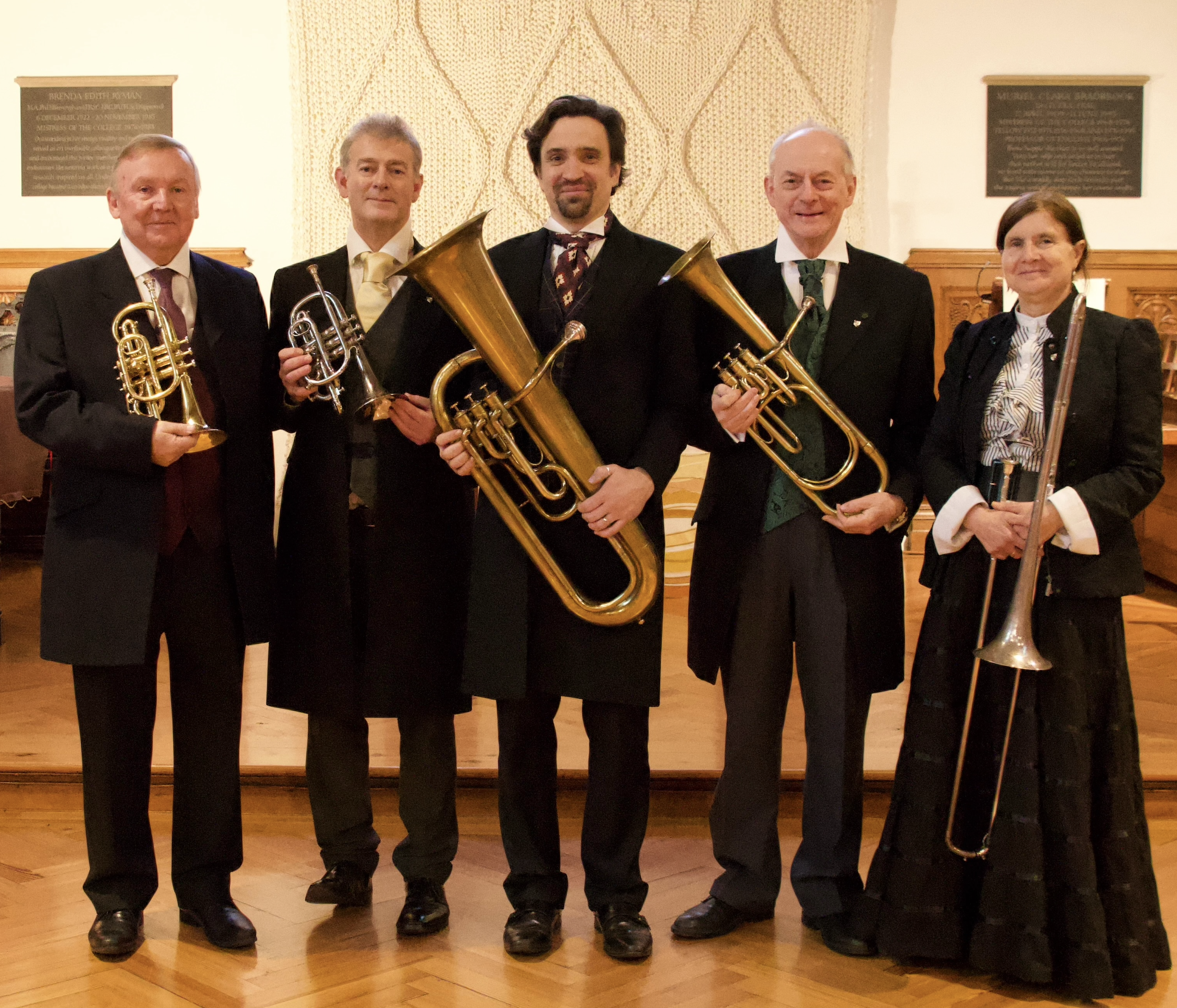 While researching the music of George Allan and Tom Bulch mainly as a writer I have found that there are dimensions to what we would love to understand that are difficult, if not impossible, to explore without the help of others. Usually this involves commissioning someone’s help. But occasionally something helpful happens that is incidental. This blog post is about one such occurrence – though to be fair, it wasn’t entirely incidental, as it has required some input from our Wizard and Typhoon project.

A celebrated quintet of Victorian music history enthusiasts have, through financial support from the Northern Regional Brass Band Trust, been exploring the sound of Victorian Shildon in a project that brings authentic brass instruments from that age together with music composed during that era by George Allan, one of the two brass music composers born in the town during the 1860s. They have recorded their experience to create something that might be close to the sound of Shildon from around the 1880s.

As well as becoming a world renowned brass composer, George was also the bandmaster of the New Shildon Saxhorn Band. Saxhorns were a very specific type of forerunner to the modern brass band instrument, patented by Adolphe Sax, of saxophone fame. The name of the band, therefore, gives us a clue to the type of instruments they preferred, and it just so happens that these experts from Queen Victoria’s Consort own one or two great examples

Queen Victoria’s Consort (QVC) is made up of some of the U.K’s leading early brass musicians and brings to life a stunning collection of original 19th Century brass instruments, these instruments are from the collections of the individual members (Robert Vanryne, Tim Hawes, Jeremy West, Susan Addison and Andy Kershaw) and from the ‘Kershaw Collection’

What follows is largely based upon information passed to us about the project by Andy Kershaw.

QVC, not to be confused with the TV shopping channel, have performed at The London Transport Museum, Steam on the District Line, Buckingham Palace, Burgh House, Cambridge University and Alexandra Palace to name but a few. The ensemble has featured in the Telegraph and on both BBC and ITV London news. The ensemble has collaborated with historical companies such as English Heritage and Lincoln Castle as well as actors from Shakespeare’s Globe and ‘Time Will Tell’

In January 2022 Queen Victoria’s Consort undertook a recording of three pieces by George Allan; ‘Vigilant’, ‘The Storm Fiend’ and ‘The New Century’. This music had been especially arranged by the Weardale based composer Steve Robson to be played as a brass quintet and to show off the instruments that were in use at the time George Allan was composing. Even though the music had already been created by  George Allan, this arrangement was necessary to bring all of the interesting parts from an array of thirty into just five parts so that it works perfectly for a quintet. The pieces were selected from the Wizard and Typhoon Collection held here in Shildon, with recommendations being made by us based on dating of the pieces.

The recordings were done in the Victorian chapel of Girton College, Cambridge. The music was an instant and joyous discovery for the performers, it suits the instruments so well allowing their colour and dynamic ranges (somewhat different to modern brass) to shine through and the arrangements have been expertly done to not lose the shape of the music, but allow the clarity of the composition to be to the fore. Apart from the march ‘The Wizard’ the music of George Allan was a completely unknown area to the members of the ensemble. As it was so much enjoyed, there is a hope to play more!

The names associated with brass instruments are also something that was in transition in the 19th century. The name Saxhorns was given to a family of instruments invented in France by the Belgian maker Adolphe Sax, his idea (along with Saxtubas and Saxotrombas) was for families of similar bore profile brass instruments to be played together as a brass choir and to add to the Cornets and Trombones. In fact it is the case that the modern brass instruments of a brass band (minus the Cornets and Trombones) are still saxhorns but now renamed (via Bombardons in the case of Basses), to those we are now familiar with.

Adolphe Sax ended up bankrupt on a number of occasions trying to copyright his instruments with no success, the fact is that many makers were making similar instruments and soon there was rivalry between the makers. We will probably never know (unless purchase records can be found) as to whether the New Shildon Saxhorn Band played on Saxhorns by Sax or his French or English competitors. What can be said is that when formed in 1857 the instruments would have had the narrower bore and more compact design similar in look and sound to the instruments that Queen Victoria’s Consort use. It can also be assumed that the Saxhorns would have been mixed with cornets and trombones. In the early to mid 1800’s instruments such as Ophicleides and keyed bugles (even woodwind instruments) were in use in Village bands, it may be that the use of Saxhorn band was to distinguish the Shildon band as a ‘modern’ brass band.

Interestingly, one of the Instruments used in part of the recording bears the maker’s stamp of one Robert De Lacy, who had a music shop in Brixton in London. This is especially pertinent as De Lacy, originally from Sunderland, was brought briefly to Shildon at the end of the 1850s to tutor and conduct the New Shildon Saxhorn Band at contests on several occasions. He later moved to London to work as a composer and publish a band journal.

The original Saxhorns played in Queen Victoria’s Consort are quite a handful to play at times.

The instruments are not as well in tune and considerable work is needed by the player’s embouchure to ensure as good an intonation between the instruments as possible. The instruments react in a different way depending on the register and how much air you put down them. As they are much narrower bore the sound is more direct than big, but their true beauty of tone is achieved when playing as part of an ensemble. As one can imagine these instruments need constant attention, care and maintenance (or even complete rebuilds). Most of this work has been done by expert craftsman Nicholas Perry. Performing on these old beauties can be likened to taking part in a vintage motor vehicle event.

The arranger and composer Steve Robson’s George Allan arrangements are outstanding. The nature of a lot of early brass band music was to have four to six musical lines that would be expanded to the full brass band size ensemble. This meant for this project that each member of the ensemble effectively took the lines of the music as solo lines. The tunes of each piece are so catchy and seem irresistible to whistle. That was a stand out moment of the project, the music seemed infectious. The registers and pitch for each instrument seemed to also fit perfectly, testament to George Allan’s skill as composer and also Steve Robson’s skill as arranger, to not lose any of the magic or authenticity of the music. The use of original instruments helps to encourage the performers to think about dynamic range, note attacks and sound colour. All of these undertakings are different from that of modern brass and through performing music on original instruments an idea of the sounds of George Allan’s lifetime are brought back to life.

The Music of George Allan project was part funded by the generosity of the Northern Regional Brass Band Trust. Their help enabled the ensemble to make the resulting video and recording freely available on the QVC website. The hope would be to record more of George Allan’s music on original instruments and if possible some with a full size brass band all on original instruments. It would also be fantastic to programme this music in concerts and introduce this fantastic music to as many listeners as possible.