It was far from an inevitable outcome, that was for sure.

I first understood that “The Typhoon” was going to be a critical part of the story of Thomas Edward Bulch when I read his grandson Eric Stanley Tomkins’s well researched book “Thomas Edward Bulch – Musician – A Family History”. In the book Eric tells us that during Thomas Bulch’s musical development through the New Shildon Juvenile Band, where he was tutored by his uncle, Edward Dinsdale, he created “The Typhoon” as his first contest march when he was merely seventeen years old.

Creating  a piece, and having it published to be played, however, are two very different things. For Thomas to have been seventeen, it must have been created in 1880 (Thomas was born the day before New Year’s Eve in 1861, so would have celebrated his seventeenth birthday on that date in 1879, so unless it was penned over New Year, 1880 would be the most likely year). Was “The Typhoon” merely a study exercise, or something more. I initially envisioned it having been a handwritten manuscript, perhaps with a few similarly handwritten copies distributed in short circulation, and fully expected that to be well and truly lost in the mists of time and figured that would be that.

As I read on through Eric’s book, the title of “The Typhoon” stuck firmly in my mind. I was struck by how appropriate that this fellow’s first piece should be so titled, particularly seeing how Thomas Bulch boldly swept his way around the world in search of the life he wanted, as opposed to the life that was chosen for him; how his compositions emanated from his pen seemingly in flurries and how, during his time in Australia, he seemed to be blown from town to town by a current of circumstances and events.

When it came to time to name our group, I was keen to avoid something ‘dry’ like Society for the Appreciation of Brass Music from Shildon. This project was about something, in our minds at least, far more exciting and I wanted to capture that. I’d already started to think of George Allan as personified by “The Wizard”, and now, without doubt Thomas Bulch was very much “The Typhoon’.

The difference, of course, was that we had, and were familiar with “The Wizard” – it was the music itself that personified Allan. But what of “The Typhoon”? It was two words on a piece of paper that, I felt, described something of the person that had chosen them as a title, and we fully expected that we’d never hear how that concept of a typhoon would be rendered by a Victorian musician.

Later, however, we started looking for references to Allan and Bulch’s pieces being performed as part of brass band programmes published in newspaper archives. Brian Yates and I would (and still do) sift through thousands of online search results hoping to find instances where particular titles are featured, or better still, possible new titles that we weren’t aware of. New titles and scans are being added to the newspaper archives constantly so you never know what you might find each time you search. To our surprise “The Typhoon’ appeared more than a handful of times. I’m going to list here the references we found so far.

Without having seen or heard the piece, this information told us rather a lot. First of all, there are at least twenty easily found references to this piece across the British and Australian newspaper archives. “The Typhoon” was not, then, simply a handwritten exercise distributed to a few friendly bands. It must have been a published piece.

The range of dates between the earliest found reference, in 1883 (ref. 9), and the latest, in 1915 (ref. 18), suggests that there was something ‘durable’ in its appeal to bandsmen; and that it had been chosen as a contest piece by at least one band (ref. 18) suggests that at least one band considered it to be of sufficient calibre a piece as to be suited to showing off the skill of a band (though alas from the review it seems the band themselves didn’t shine on the day of the contest).

It was heartening to see that Bulch himself considered it worth performance. In 1883 at Stanhope Park, Darlington (ref 9) he would have been the bandmaster in charge of New Shildon Temperance and the piece would have been relatively newish, but we can see from ref. 2, and ref. 4, that it endured with his bands even following his emigration and as late as 1887 by when he had penned many more pieces.

It was particularly nice to see that in ref. 15 the North Eastern Railway Servants Band played the piece at Seaton Carew in 1892 – given that they had been Bulch’s former employers at Shidon’s railway wagon works. I wonder how many of the band on that day knew that the composer had been a fellow employee of the NER.

Overall though we can see that “The Typhoon” had been more than just the scratchings of an adolescent bandsman. We couldn’t see any references to the piece having been played between its suggested composition year of 1880, and the first reported instance in 1883 – however it’s still highly possible that it was and also quite likely that there would have been a delay between the young man finishing the piece and then, as an untested composer, convincing a publisher to take a chance on publishing it.

This far we knew something more of “The Typhoon” but still expected that with so old a piece, we’d never get to hear it.

One hope lay in the fact that Bulch had spent most of his adult life in the southern hemisphere, so we harboured a little hope that our new Australian friends with connections to City of Ballarat Brass Band (a direct descendent of Bulch’s Model Brass Band) may know something of it. Alas however, it having been a ‘holy grail quest’ for them too, their searches in Australia had ended in disappointment. The situation wasn’t helped by the knowledge that the fire that destroyed Thomas Bulch’s music shop in Ballarat in 1889 had consumed much of his stock of composed works at that time. It’s not clear whether any of the older pieces were ever reprinted. They too had all but given up hope of hearing “The Typhoon”.

However, to have given up fully at that point, would have been to underestimate the longevity and tenacity of brass bands in hanging on to legacy assets. Though it’s true to say that one doesn’t always know and appreciate what one has in their possession often until they have relinquished it, and it’s true that many antiquarian pieces of music have been binned, or burned, over the decades – particularly when dog eared an in ill repair – many brass bands still treat the music in their libraries with reverence and curate them with care. Giving up would also have been to underestimate the networking capabilities of Brian Yates.

It was with much excitement that we received an e-mail from Brian claiming to have possibly located “The Typhoon”. It seemed the Stamford Band, a band descended from one of those that we had seen to have performed the piece, still had a copy in their library. Brian had noticed the piece mentioned in the Stamford Mercury of 9 June 1905 (ref. 12 above). We were flabbergasted to say the least. Was it our ‘Typhoon’ or another (as titles are sometimes arrived at by different composers – there is at least one case where Bulch and Allan used the same title). The tense wait began – and it went on for some time. We were, at the time, choosing the pieces that we’d like to hear in our first exploratory concert, so tentatively pencilled “The Typhoon” into the programme as a key milestone of the story we wanted to tell, not knowing anything about the quality of the piece, or whether we would truly have it in our possession. Elaine Wilkins of Stamford Band offered to help us out by sending a copy. People are generally busy, we find ourselves in the same situation often where we suggest we’ll do something but struggle to make the time to do it. In this case the task we waited on was to dig the piece out from the library and scan it to send to us. Eventually, however, “The Typhoon” quietly and miraculously arrived. As was indeed what we had been searching for. 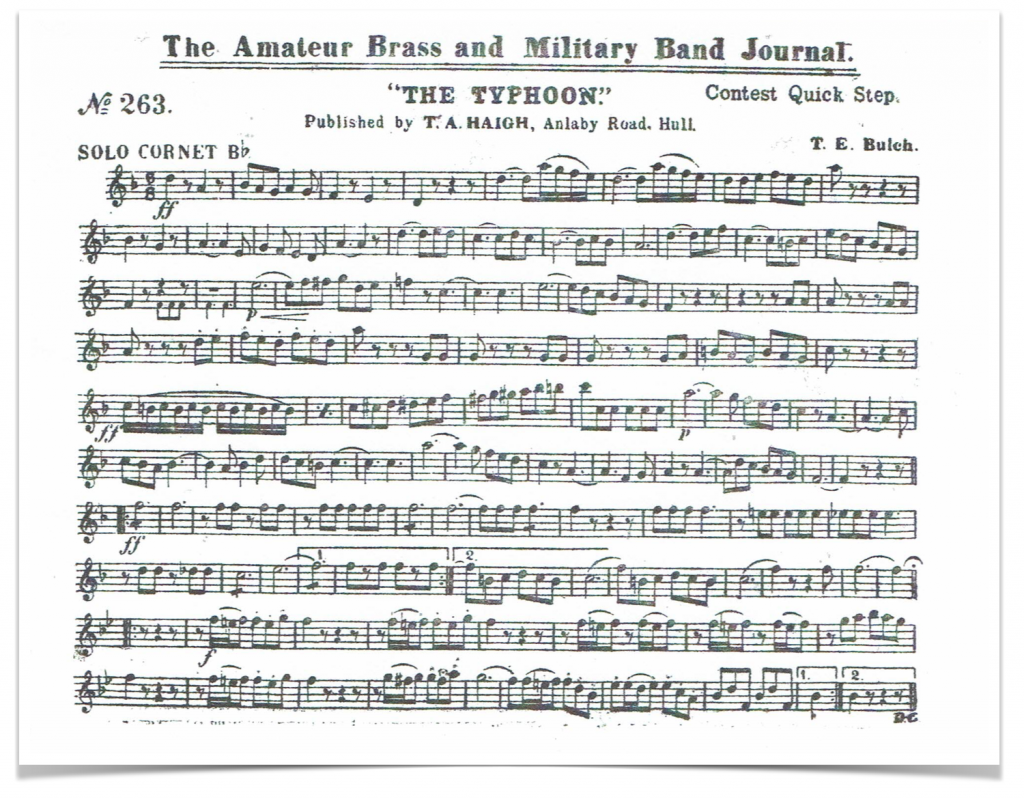 As you can see from the image, it was indeed, as we had supposed, published. This was by T. A. Haigh in his Amateur Brass and Military Band Journal which we are led to believe started in Hull somewhere between 1877 and 1879. “The Typhoon” was piece number 263 by that journal. We knew that Thomas Bulch had been published by Haigh as we’d seen “Ballarat” which we believe to have been created in 1884 and which is numbered 482 in the series. So just tracing the numbering back hypothetically the piece would most likely have been published just over half way between the journal’s formation and 1884, so a possible publishing year of 1881, perhaps, may not be entirely unviable.

This in itself adds to our understanding of the juxtaposition of George Allan and Thomas Bulch. It seems almost certain now that Bulch was the first of the two to be published, and that both were initially published by the same journal. Did George Allan get the idea to submit pieces to Haigh because Tom Bulch had done so? Did Tom Bulch suggest Allan to Haigh, or Haigh to Allan? We’d had these thoughts before following the discovery of Ballarat, but this discovery really added more clarity to the timeline.

At the time of writing we’re still to hear “The Typhoon”. Steve Robson had hoped the Easington Band (of which he is part) might be able to do a tentative run-through at rehearsal, however it quickly became clear that as they were building up to some key events in a short time frame there would be no opportunity for such frivolity, so as yet we wait – but we know that the longest we’ll need to wait will be till Sat 4th August when our group hosts its first concert at Ushaw College and The Typhoon will be aired once again in the county in which it was created some 138 years previous.

Our friends in Ballarat, however, are already some way ahead of us. I heard from Robert Pattie by e-mail (having without hesitation shared the piece immediately with Robert, and Chris Ducardus, as well as Eric, as the true authorities and inheritors of the legacy of Bulch and his status in the Australian brass band movement). The word from Robert was:

“Both my bands are really enjoying playing “The Typhoon” and they are really making a good job of playing it well. It really is a top March and the top section bands over in England should really have a serious look at it now that it has been re discovered.”

If anyone’s reading, you can take that as being from someone who knows their brass.