This week, despite receiving a flurry of new pieces of information of interest to the overall story, I have been taken on something of a detour concerning someone other than Thomas Edward Bulch, or George Allan, but without whom it’s possible that their stories may well have turned out very differently.

It’s possible that neither George Allan nor Thomas Edward Bulch ever met Robert de Lacy, but they would certainly have heard about him from Thomas’s grandfather, and bandmaster to both, Francis Dinsdale.

Here’s a preview extract of my draft ‘main detailed narrative’ from the overall story explaining how Robert de Lacy fits in with the forming of the New Shildon Saxhorn Band and the raising of Francis Dinsdale to being its bandmaster.

De Lacy, born in York, around 1831, into a family of bookbinders that later settled in Sans Street, Sunderland, had led the Wear Royal Yacht Club Band at the Bishop Auckland contest in 1857 so may have been known to the Shildon band from that event, or previously. Never resident in New Shildon it would appear that De Lacy, a solo cornetist, would proffer his services wherever they be needed. It’s documented that as well as conducting River Wear Yacht Club Band, Allendale and, at the same Barnard Castle contest of 1859, not only Shildon but also Stanhope. In the early days of the brass band movement there would be so few experienced conductors that to secure the services of one might give a band a distinct edge. In the meantime the bands without an expert conductor might develop one of their own, or else persuade one to make their services permanent.

We know from a newspaper report that on Saturday 24th July 1858 at a, reportedly chaotic, band contest and horticultural fete in Darlington that Francis conducted the New Shildon band while Robert De Lacy conducted that of the Wear Royal Yacht Club. Of the 13 bands competing the latter achieved the better result, coming third overall.

Robert De Lacy is then known to have conducted the Shildon Saxhorn Band at the Barnard Castle Contest at the end of August 1858 where an improved performance saw the band taking on, among others, the short lived New Shildon Philharmonic Band, and coming second, from six, playing an arrangement of the ‘Hallelujah Chorus’ and ‘Il Trovatore’. One reporter wrote:

“They performed the task with extreme care and in a manner which clearly showed that they had undergone diligent training.”

The respect for Mr. De Lacy is perhaps demonstrated by the fact that at the end all the bands united under his conductorship to play the national anthem, as was the custom of the time. The Durham County Advertiser of the day reported on 3rd Sep 1858 that:

“One could not but notice the performance of the Darlington and Shildon Sax-Horn Bands, which was fully up to the mark to which their long practice should bring them. The announcement of the result was given amid breathless suspense.”

Darlington were awarded the first prize.

At a further band contest in Sunderland on Monday 13th September 1858 De Lacy conducted the band again to see New Shildon placed fourth and De Lacy’s other band, the Wear Royal Yacht Club, second. Straight afterwards the New Shildon band made presentation of a silver tankard to De Lacy “as a mark of esteem for him as their master and instructor.”

It seems a more involved agreement had been reached over De Lacy’s services, which may have contributed to this improved form. The Durham Chronicle on Friday17th September 1858 reported:

“PRESENTATION. – The New Shildon Saxhorn Band presented Mr De Lacy, their tutor and leader, with a handsome vase, on Tuesday last, as a mark of their esteem and regard for him personally, and as a musical teacher. Mr. P Robinson, of Bishop Auckland, furnished the testimonial.”

The running of a brass band wasn’t all about contests, though. The Kendal Mercury of Saturday 11th December 1858 reports that a brass band from Shildon featured as part of an evening of celebration at the Railway Hotel (now the Old Well) in Barnard Castle following the opening of the Deepdale Railway Viaduct, a 161 feet high cast iron lattice bridge on the route between Barnard Castle and Kirkby Stephen designed by Thomas Bouch.

The following year, at a contest at Polam Grounds, in Darlington on May 31st, Francis Dinsdale was the named band leader, and again Robert De Lacy conducted. New Shildon came fourth. However as the Newcastle Daily Chronicle of 7th June 1859 tells of a Grand Brass Band Contest and People’s Festival at the Northumberland Cricket Ground, Newcastle-On-Tyne, on Whit Monday, Robert De Lacy is the conductor of the ‘Allendale Town Saxhorn Band’. Also among the sixteen bands competing in that contest, for fifteen pounds and a silver medal for each band member, is New Shildon Brass Band now under the conductorship of Mr F Dinsdale. The band ‘leader’ at that time was reported as Mr John Gornal.

It appears from other contemporary newspaper reports that De Lacy’s services were also courted by Stanhope Band and his influence over New Shildon had decreased. De Lacy again conducted New Shildon Band at the Barnard Castle contest in September 1859 where Shildon were unplaced, but De Lacy’s other band at the time, Stanhope, took first prize. Interestingly at that contest there was also a Bolckow and Vaughan’s Band, of Middlesbrough, competing. Messrs. Bolckow and Vaughan, as mine owners, both having a Shildon connection and having parallel streets in the town named after them.

The bandsmen of Shildon were, through their involvement in the band, privileged to have been able to witness spectacular events in places away from their home town. he Derbyshire Courier reported on 2nd July 1859 that the Shildon Band would participate at a “Monster Brass Band Contest and Gala” at the Chesterfield Recreation Ground on Monday 11th July 1859. Featuring 25 bands and 390 performers, “After the First Part of the Contest the whole of the bands will form an immense circle and perform “Rule Britannia” and ” The National Anthem”. Also promised was “Illumination at night by various coloured lights”

On the 10th and 11th July 1860 a huge national brass band contest, Enderby Jackson’s “Great National Contest” was held at the Crystal Palace in London featuring one hundred bands from all over the country.  New Shildon Band competed on Tuesday 10th under the leadership of “T Dinsdale”. Excepting the possibility of a misprint, this would be ‘Tony’ Dinsdale, Francis’s son who would have been around 23 at the time. Robert De Lacy, on that same day conducted Stanhope Band.

The cost, and organisation necessary, to transport a whole brass band by rail to the capital, and accommodate them, would not have been insignificant. It’s not clear how this was achieved, but unlikely that it would have been achieved without the benevolent patronage of the New Shildon townspeople or businesses.

What else do we know about Robert De Lacy 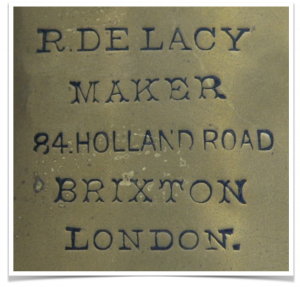 Of what happened next to Robert de Lacy we know this. On Oct 24th 1861 he joined the Palatine Lodge 97 of Freemasons, listing his profession as Professor of Music. The lodge appears to have a number of such professors as members. It’s uncertain whether Robert held a formal teaching post. At some point before 1871 he moved from Sunderland to London where he was living with his wife Eliza, in Lambeth, as well as a son Charles John and daughter Rosamond, both of whom were born in Sunderland. But by 1881 he was a widower with his daughter Rosamond and a widow Louisa Hill from Bath. There is evidence online that Robert de Lacy would advertise his services as a bass singer for ensembles, and also that at one point he was a singer at St Paul’s in London.

While in London, Roy Newsome tells us in  “Brass Roots” that he established the London Brass Journal, to which he was a principal contributor. This became by July 1888 the London Brass and Military Band Journal.

We know also that Robert became involved in the production of musical instruments. The photograph above is of the maker’s mark  on a ‘de Lacy’ euphonium that was advertised for sale at auction. A bass trombone has also been seen online. Steve Robson has seen, first hand, an ‘R de Lacy’ ventil-horn (though we have received advice that the ventil-horn instrument was a patented design owned by the Distin family who manufactured them, so it is possible that this particular horn might have been sold but not manufactured by de Lacy) . And this video by Trent Hamilton of Wellington, New Zealand from YouTube shows you a ‘de Lacy’ cornet.

That Robert de Lacy had ties to the Shildon bandsmen and that two of those went on to be so highly engaged with the brass band journals of their day, one founding their own, is interesting.

Robert’s son, Charles, went on to be one of the foremost British marine artists of his period, known especially for his warship imagery. He was trained at The National Gallery and the Illustrated London News was one of his patrons – he exhibited at the Royal Academy in 1889.