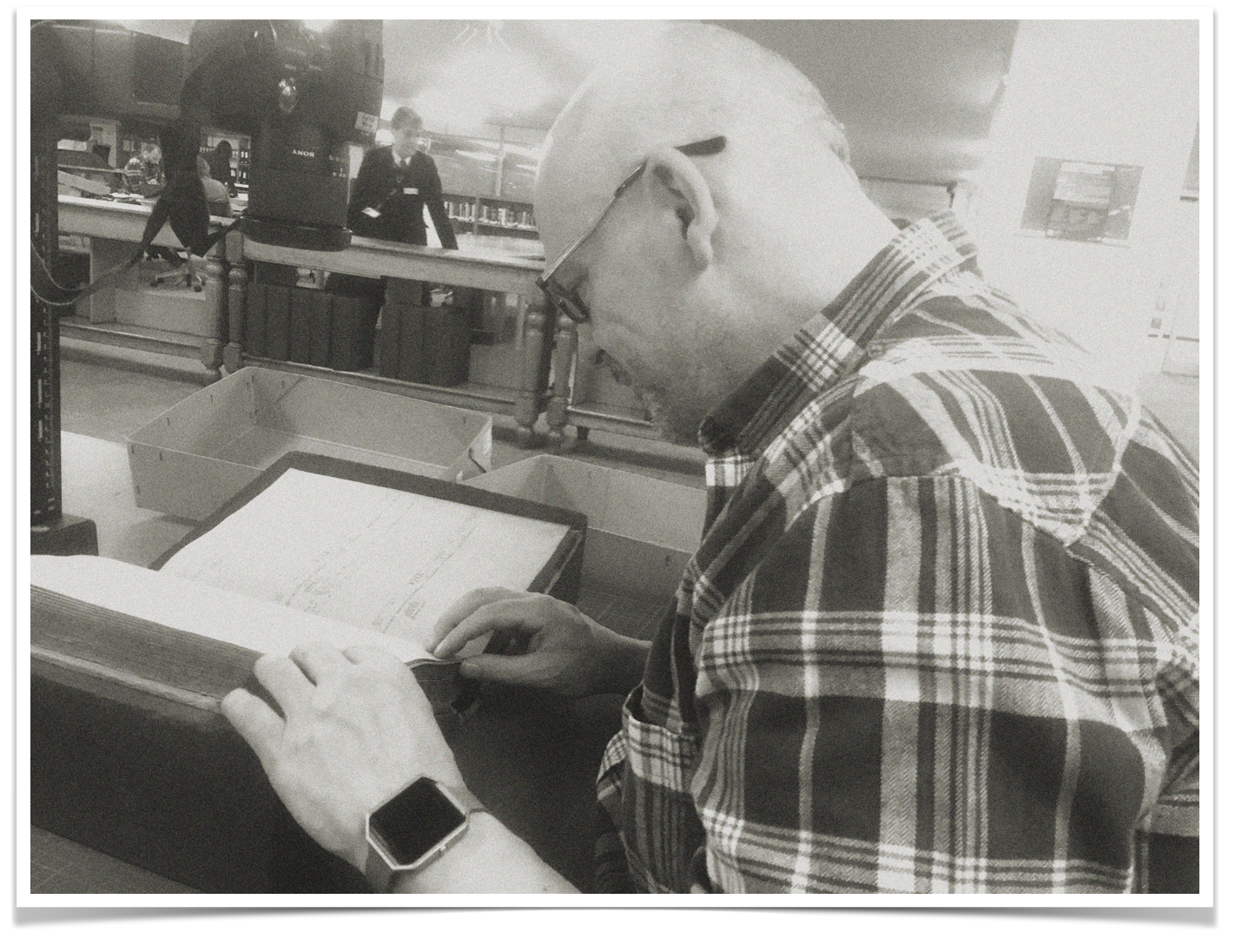 At the end of April I had the good fortune to have a little time away from work, and a little money to afford me to pay a visit to the National Archives in Kew, London. I’d been hoping to do this for a while as I knew they had at least two resources that I was interested in that might tell me a little of the lives of both Tom Bulch and George Allan, and possibly a few others besides.

Item of interest 1: The membership books for the Mechanics Institute

I’d long had a hunch that either one, or both, of our composers might have been a member of the Mechanics’ Institute that once stood on Station Street in Shildon. Both men struck me to have been above average culturally and educationally for working men, and the Mechanics’ Institute in Shildon, having been initiated by Timothy Hackworth for the mental enrichment of his workers, would have afforded access to both cultural and technical information.

Item of interest 2: Wages books for the railway wagon works of the NER

We know a bit about the employment of both Bulch and Allan from their census records, but what I really wanted to take a look at this for was to try to ascertain whether they both worked there at the same time. Thomas Bulch would have started there earlier than George Allan but he left Shildon in 1884, so was there an overlap?

The national archives contain hordes of items about Shildon and the presence of the railways in Shildon, but these are mainly technical and/or administrative and were unlikely to refer to people as such. I did reference a couple of other documents whilst there such as Fines Books for the North Eastern Railway (it seems our chaps were well behaved as neither featured in the fines book, with fines being issued for ‘larking about’ leaving early or ‘slacking’ off as well as more serious offence). Some of the other documents may tell us in future more about the way the wagon works operated, or rules and facilities of the Mechanics Institute, but for now it was the people that interested us most.

The archives building was easy to find, being not to far from the Kew Gardens station of the District Line. We’d pre registered which saved some time on arrival. Completion of membership took only a little while. Beyond that the resources were free to access, and the staff very helpful, so it was just a matter of time, and of how much of it we had. We claimed a desk number and raised an order for the articles we wanted to see, and had a quick breakfast while we waited patiently. When documents were ready to collect from the pigeonhole it was then a matter of carefully poring over the pages for what might help us to better understand these aspects of the lives of Allan and Bulch. The desks had a convenient camera mount to aid us to capture visually what we found with the aid of a trusty 35mm digital camera.

What did we learn?

There were two members ledgers for the Institute, and they were in good condition for their age. We are fortunate that someone thought to preserve them by handing them over to the National Archives. The first moment of delight was in finding reference to Francis Dinsdale, Thomas Bulch’s grandfather and the original New Shildon based bandmaster of the New Shildon Saxhorn Band. Francis was very briefly a member during 1871 and 1872. Overall the Institute membership seems to have been a catalogue of the ‘great and the good’ of New Shildon, by which I mean people that seem to regularly feature either when looking at the History of Shildon as a whole or when looking at the story of Allan and Bulch. People like Dr Smeddle, Dr Fielden and William Dodds (the choirmaster from All Saints Church whom, if we are right, first suggested to George Allan that as well as singing in the choir he might do well to join a brass band) are pretty much ever present year after year.

This was a real ‘bingo’ moment, though it was almost a surprise to me that Tom Bulch only featured so briefly in the membership books. He and older brother Frank both joined in 1876, when he would have been around 14 years old, but left in the same year. I was surprised only in that Tom was so entrepreneurial in his life that I thought he would have thrived on the knowledge that the Institute might have given him access to, but I think that we must also remember that he was part of a very large family and the subscription fee might well have been a frivolity compared with the need to keep the family fed and clothed etc. Perhaps he saved to join and was simply unable to sustain it. perhaps he joined for access to a specific resource or event, and simply got what he needed and no longer had use for membership.

Throughout the pages were other brief references to other members of the Bulch family, though none for a sustained period. The longest standing member seems to have been Jerry Bulch (who became one of the organisers of the annual Shildon Show). had Tom Bulch stayed in Shildon longer than 1884 I’m sure we’d have seen him again in these pages.

It was a while later that we found a first reference to George, though as it turned out George was the one that took the greatest interest in the Mechanics Institute. His membership was intermittent, with period of membership and absence lasting a few years at a time, on and off. We first see him in the membership ledger in 1881, some 5 years after Tom Bulch’s brief membership, and when he would have been 19 years of age, so definitely of working age and it was probably his own money he was spending. He stays a member till 1883, then he is missing till 1885. He leaves again after 1886 and rejoins in 1892 after which he more or less continues to be a member till 1906. Along the way he is joined, as a member, by younger brothers Ralph and Thomas briefly and also his wife Elizabeth. So George seems to have been getting something he wanted or needed from the institute. What that may be we will have to speculate.

One of the huge disappointments was that I did not find Tom Bulch Jnr. at all in the wages books. This doesn’t mean that he never worked there though, simply that at some point after he left Shildon the records were transferred from the old format (whatever that may have been) to these new ledgers; and on transfer all employees that were no longer employed there were omitted from the new version. Tom’s friend James Scarffe was also missing, and though there was a Samuel Lewins, it was a younger probable relative (Sam Lewins that travelled to Australia with Tom Bulch was a miller). We do learn some things about the Bulch family from the wages books. We learn more about the employment of Tom’s father (also Thomas), and also that his brother Jerry Bulch was also a smith at the works for a time. I had hoped to find evidence that before his emigration, Thomas had progressed to the role of ‘Fitter’ as he claims in the ship’s manifest for the ‘Gulf of Venice’ when he travelled. However I was unable to find this evidence.

Happily the wages books confirmed much that we knew about George Allan and added dates to that understanding. He had indeed been employed by the NER before he became a blacksmith’s striker. We also learned exactly when he became a wagon painter and exactly when he retired, which helps us to better understand the timeline of his life story much better. What was perhaps a surprise though was that whereas the census records (which let’s not forget are a person’s own declaration of who they are and what they do) state that George was a blacksmith – and yet the wages records show that he was a blacksmith’s striker right up to when he became a wagon painter. Not only that but that a wagon painter was a ‘step-up’ from blacksmith’s striker; not as I had previously assumed a step down from a blacksmith. Another, heartwarming, find was that George’s son, William Willoughby Allan, joined the wagon works as a wagon painter also and worked alongside his father from 1923, to his father’s retirement in 1925. Curiously the wages books suggest that William’s wage for his 53 hour week was higher that that of his father. Did his father have some kind of dispensation relating to his music for which he forfeited some of his wage? Or was he simply considered less worthy or able? That is not clear.

Overall we learned much of the earnings of these men, and that overall it was very little. It is understandable having seen that how Tom Bulch saw his future as being elsewhere and why he was perhaps so determined not to follow that path, and, instead, to try to make a living doing what he loved the best, which was his music. Certainly nobody could accuse him of being lazy in that regard, his productivity was phenomenal. Conversely, one can also see how George Allan took a different strategy which was to stay in the place he was most comfortable, but to lift himself from the drudgery of a day job he perhaps felt necessary in order to ‘fit in’ in his community, by producing and selling music, receiving payment over and above for his skills as a tutor and band-master, and not forgetting that we knew that he also tried to sell his smithing skills privately. In their own ways both men showed different types of ambition. We know from what we see in probate records that George was not uncomfortable financially at the end of his days. Though Tom experienced hardship in his time it was often more down to bad luck or changes in world circumstances that were beyond his control, for example changing tastes following a bitter world war, or simply being mistaken for being a particular nationality.

I was sad not to have found absolute proof that Tom and George worked side by side in the blacksmith’s shop for a time, but what I did find at the archives does suggest that it’s highly probable, and that’s a step forward.

While we were in London we did get to go to the British Library, and we were able to pick up two new (to us) George Allan road marches. ‘Niobe’ and ‘On Parade’. There was something about these that we’d not seen before with a George Allan piece which was that they were written with reed parts, piccolo and ‘clarionet’ (i.e. the compositions were set up for military band), as were the versions hey kept there of ‘King Edward’ and ‘The New Century’. In any case they made a nice addition to our collection and could well be heard at some point in the future.