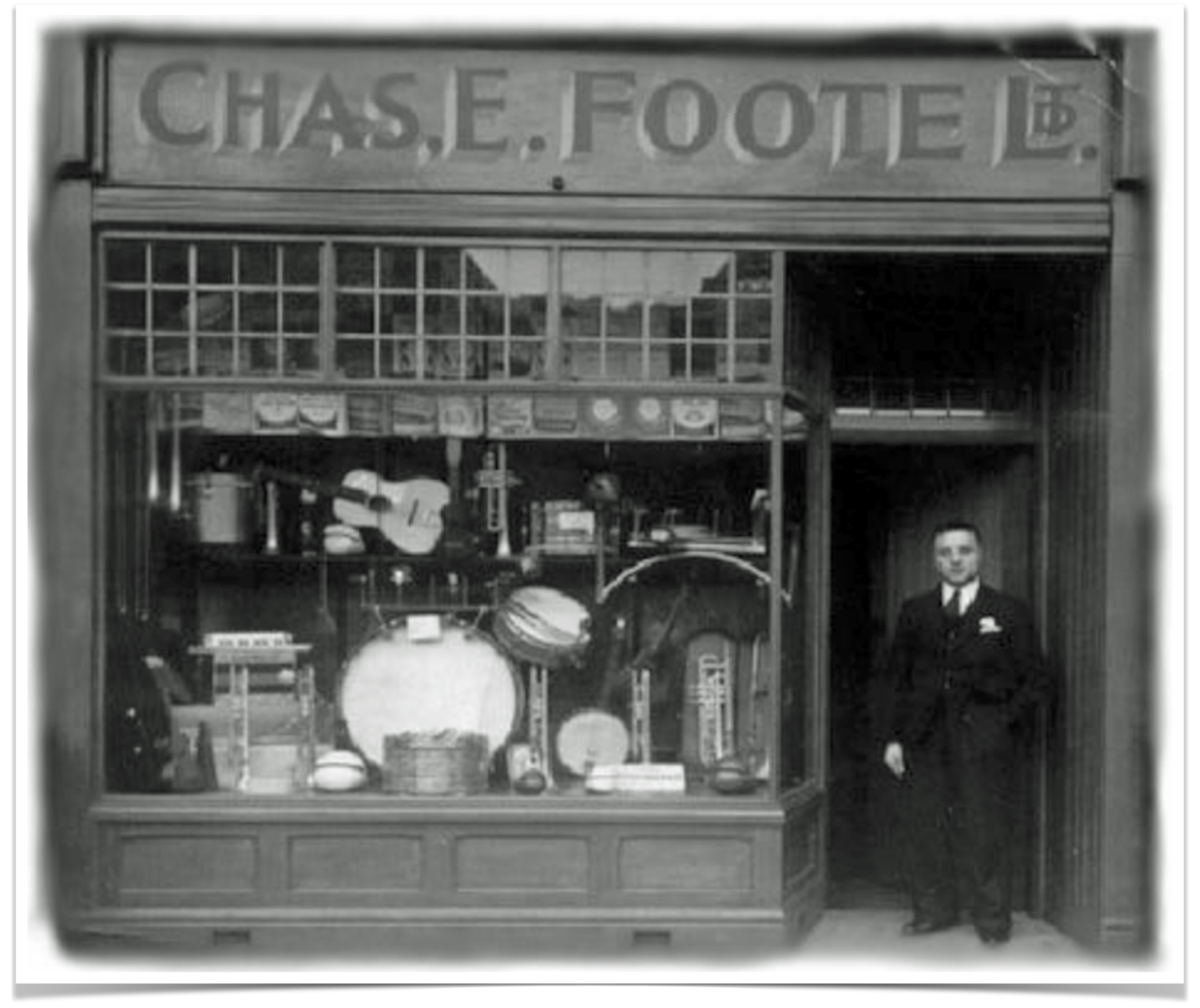 Which category this latest mystery falls into we’re not quite sure yet, but if we were to be able to solve it, it might tell us more about the early relationship between Tom and George.

It was Robert Pattie that found the beginning of this particular thread when he managed to locate a copy of this piece….

‘Ballarat’ was the town (or city even) that Thomas Bulch went to first when he emigrated to Australia, living just outside it in Creswick, slightly to the north of the city.

Eric Tomkins (Tom Bulch’s grandson) informs us that the earliest record he could find for this piece being played was in the Ballarat Star of 24th November 1884, where it was played by the Allendale and Kingston Band in Ballarat itself. Tom Bulch was at the time the bandmaster of that particular band.

Eric theorises that the march must therefore have been composed in around September or October 1884.  (Tom Bulch had arrived at Port Adelaide in May 1884 after his unpleasant sea voyage, during which the propellor on the ‘Gulf of Venice’ had shed two blades, slowing the journey considerably). Eric’s estimate pre-supposes that the piece was written AFTER Tom Bulch had arrived in Australia, which seems a fair conclusion. It may, perhaps, have been that it was composed back in Britain, in anticipation of his travels, or perhaps during the voyage. In any case it would have been published when Tom Bulch was around 22 years of age.

For a ‘contest’ piece it doesn’t look to be difficult, but it is worth remembering that in the 1880s the fledgling brass movement, particularly in Australia, would have been at a different level of proficiency to what we expect in a contest today, and that Tom Bulch was one of a number of bandmasters of his day that took great pains to gradually improve the standard of playing across the banding community; with great success according to newspaper reports of the day. His pieces would have been pitched accordingly to achieving that aim.

All of this however does not describe the ‘mystery’ to which I’ve alluded however. The ‘mystery’ relates to the publisher of the piece.

As you may have noticed, this piece was published in Britain by T. A. Haigh, of Anlaby Road, Hull, in his Amateur Brass and Military Band Journal; it being no 482 of a series.

We know from the life of George Allan that he too had a publishing relationship with T. A. Haigh and we know that pieces such as ‘No Retreat’, ‘Lefebvre’ and this piece below, ‘Granville’ were all also published by Haigh in the same journal. 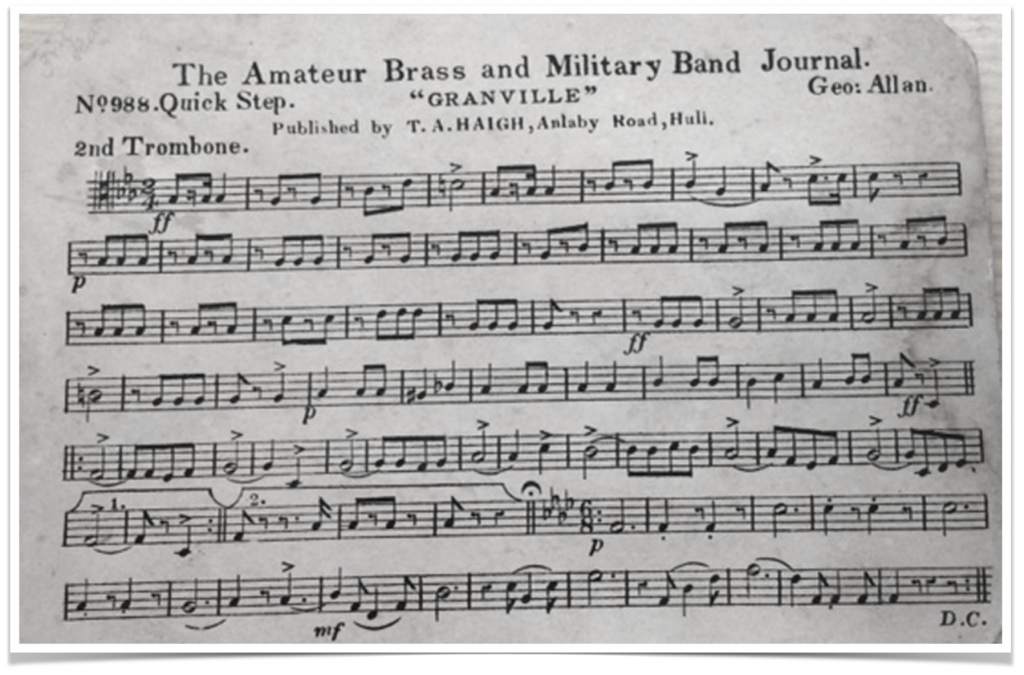 The mystery to me is around how both composers ended up being published by Haigh, and what that tells us about their relationship with each other, and at the moment without the evidence to explain this all we can do is put a few theories on the table.

We know that Tom Bulch had family members acting as agents for him back home in Britain. His father, in Shildon, acted as an agent, and we have evidence to suggest that his brother did too whilst living in Darlington. So we know that his pieces were sold here whilst Bulch himself was living in Australia. Tom may however have had a direct relationship with High, whereby he send new compositions directly to him to be potentially published for sale in the UK market. It’s possible too that the British journals would have been exported to Australia for sale. It may be that Tom Bulch had not yet established a relationship with an Australian music publisher so naturally continued to send pieces to Haigh.

We know that this piece, ‘Ballarat’, was indeed played in Britain too. There are reports of it being played in Sunderland, Lancaster and Burnley all in 1885, so this piece was definitely available here in Britain.

Which of the two, Allan or Bulch, was published by Haigh first would be interesting to know though. Tom Bulch was 15 months older than Allan so it’s possible he might have matured to the state of being a composer first. We’re not yet aware of any Allan pieces that pre-date 1884.

We also know that Thomas Bulch was composing prior to his emigration and had earlier pieces being played by bands in Britain, though we’ve not seen yet whether they were published and whom by. We understand from what has been written that ‘The Typhoon’ was composed when he was 17 which would have put it at around 1879, but though we are hoping to receive a copy of this piece at some point it does not mean that it would have been published in that year. It’s possible though, as Haigh started his journal somewhere between 1877 and 1879.

Thomas Albert Haigh, born in 1843 was, according to academic Roy Newsome, a Lancastrian, who has moved to Hull. He was a high ranking freemason and also an examiner for the Tonic Sol-Fa College, being a reputedly good singer in his own right. It’s remotely possible that Bulch and Allan may have become acquainted with him through their singing studies as much as their brass band involvements. His journal regularly included pieces by a good selection of the principal brass composers of the era including William Rimmer, J. Ord Hume and Edwin Swift.

A clue may lie in the serial numbers of the pieces published. So for example we can see here that ‘Ballarat’ was number 482, ‘Lefebvre’ by Allan was 1323 and ‘Granville’ number 988. Which leads me to think that going forward I should make more of a point of understanding the serial numbers of pieces in relation to journals; which may lead also to a better understanding of the dating of pieces, or at least which theoretically predates which. I shall be paying more attention to this going forward.

Chronologically, though, it feels most likely at this point that Thomas Bulch may well have been the first of the two to establish a publishing relationship with T. A. Haigh. Which leads us to wonder, if that were the case whether:

a) George Allan later contacted Haigh entirely independently (perhaps having seen that Tom Bulch had successfully had pieces published) to establish his own publishing relationship.

d) some other possibility

We know from our research so far that Thomas Edward Bulch and George Allan must have known each other, and quite well at that. Even though they ended up as bandmasters of different bands, they had, prior to that, been schooled together, played in a band alongside each other, been tutored by the same bandmasters, and worked together at the railway wagon works. How close were they? Did they see themselves as kindred spirits, or rivals? Did they help each other, or did they compete to outdo each other at every turn? Was one inspired, or driven, by the success of the other enough to follow their exact footsteps initially.

For now we don’t know the answers to these questions, but more clues may well be out there.