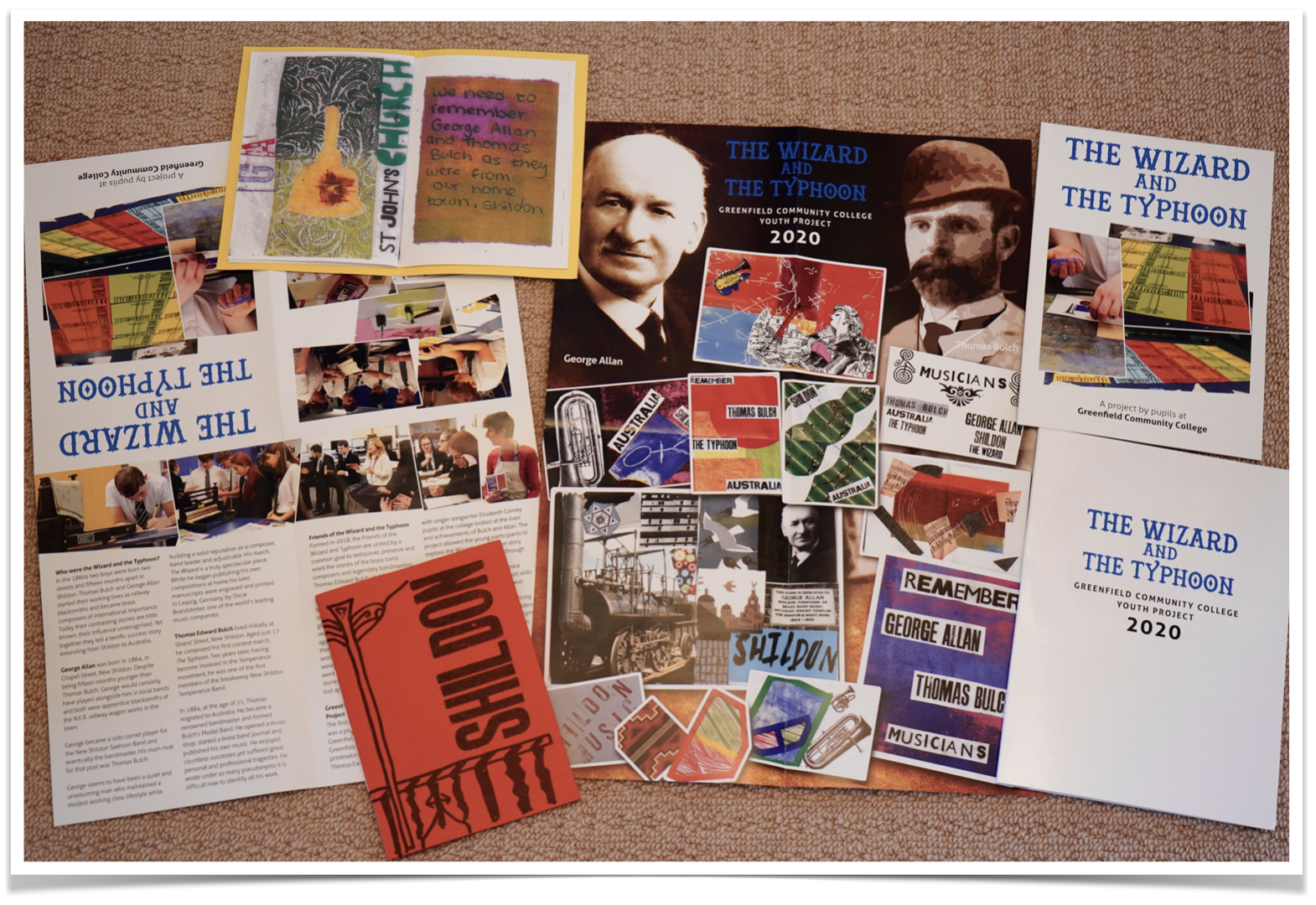 One of the things I wrote about during 2020 was our Project Homecoming which we created in partnership with our Project Manager, Alison Lister, and Greenfield Community College with Greenfield Arts which was funded in part by Northern Heartlands, one of the Great Places schemes, the County Durham Community Foundation, National Lottery Heritage Fund with Arts Council England and Shildon Town Council. I wanted to give you an update.

As I previously explained the idea of the project was to introduce what we had discovered about the lives of George Allan and Tom Bulch to a wide group of young people from Shildon in the hope that it would inspire them about the possibilities for their own future, and how simple skills that are accessible to them as young people can lead to opportunities in later life. The idea there being that, for example, the musical skills Tom and George acquired as part of their childhood enabled them to transform their own lives as adults – as well as transforming the lives of many people around them.

The project had two strands to it. The first a music centred strand in which the young people, taking inspiration from Tom and George’s story, would work with a music facilitator, the singer songwriter Elizabeth Corney, to create a piece of music of their own – that could be recorded and performed as their first collaborative musical creation, showing the power of composition as a means of expression, and the importance of teamwork. The second thread related to the printing as a powerful art form. Both Tom and George had a great understanding of the value of printing. Both became publishers in their own right so both acquired an understanding of the process required to print music, and Tom Bulch in particular understood the importance of an attractive printed image in the marketing of his pieces for the piano. So we engaged print specialist Theresa Easton to show the young people some accessible printing techniques, and help them to come up with their own designs, again inspired by Tom & George, to be combined into a ‘zine’ showcasing their work.

We had some great hopes that as part of this project we’d be able to share a performance, and exhibit the young people’s work. However, as the project workshops were happening, a global virus pandemic struck, bringing a great deal of disruption. As the project workshops were coming to a conclusion national restrictions were being introduced and the country’s education network, as with so many other things we’d taken for granted in everyday life, was shut down.

Though the students had been able to finish their creations, and had enjoyed the sessions, we were unable to get together to have the final showing of what they had produced, or to get together to give them the packs that contained their creations, a copy of the ‘zine’ and a recording of their musical creation. Also, as mass gatherings and community facilities were closed we were equally unable to share their work with the community. Thus, the project has been brought to, what is in many ways, a disappointing conclusion.

We are, however, hugely proud of the young people involved, and the spirit in which they embraced the message within the project and the skills we were hoping they would benefit from. One fantastic output from the project, of which all of the participating young people received a copy, is the delightful and informative printed pack depicted in the image in this post. This contains an informative poster about the project, showing the young people’s work, and a copy of their ‘zine’ so that they can carry the memories of how they combined their talents to create it. We hope their experience will continue to inspire them as they find their own paths in life, and that some of them will find ways to re-use those skills along with the many others they have learned through their education.

One of the teachers involved, Art teacher Laura Peaker, told us that “The students found the experience invaluable in developing their art skills in printing and Zine making. It was fantastic for them to have the opportunity to work with a practicing artist. It has developed their confidence in both art and within their own right. It will be a life long memory for them.”

Our whole group, by which I mean myself and the others in the Friends of the Wizard and The Typhoon, would like to thank the young people who took part – as well as our fantastic facilitators Theresa Easton and Elizabeth Corney – and of course the brilliant everyday inspirers, those teachers at Greenfield Community College, Laura Peaker and John Gomez, not forgetting the always amazing and dedicated Katy Milne of Greenfield Arts who always works so hard to enrich Shildon and Aycliffe through opportunities to learn the value of the arts.

If you want to know more about Theresa Easton’s other work you can read about it here.

Important too, to recognise the contributions of Northern Heartlands, one of the sixteen Great Place Schemes in England which is backed by the National Lottery Heritage Fund and Arts Council England, as well as Durham County Council and Shildon Town Council. Without their support, this, and many many other great enriching experiences across our communities would not be able to happen, and we’d all be poorer without them.