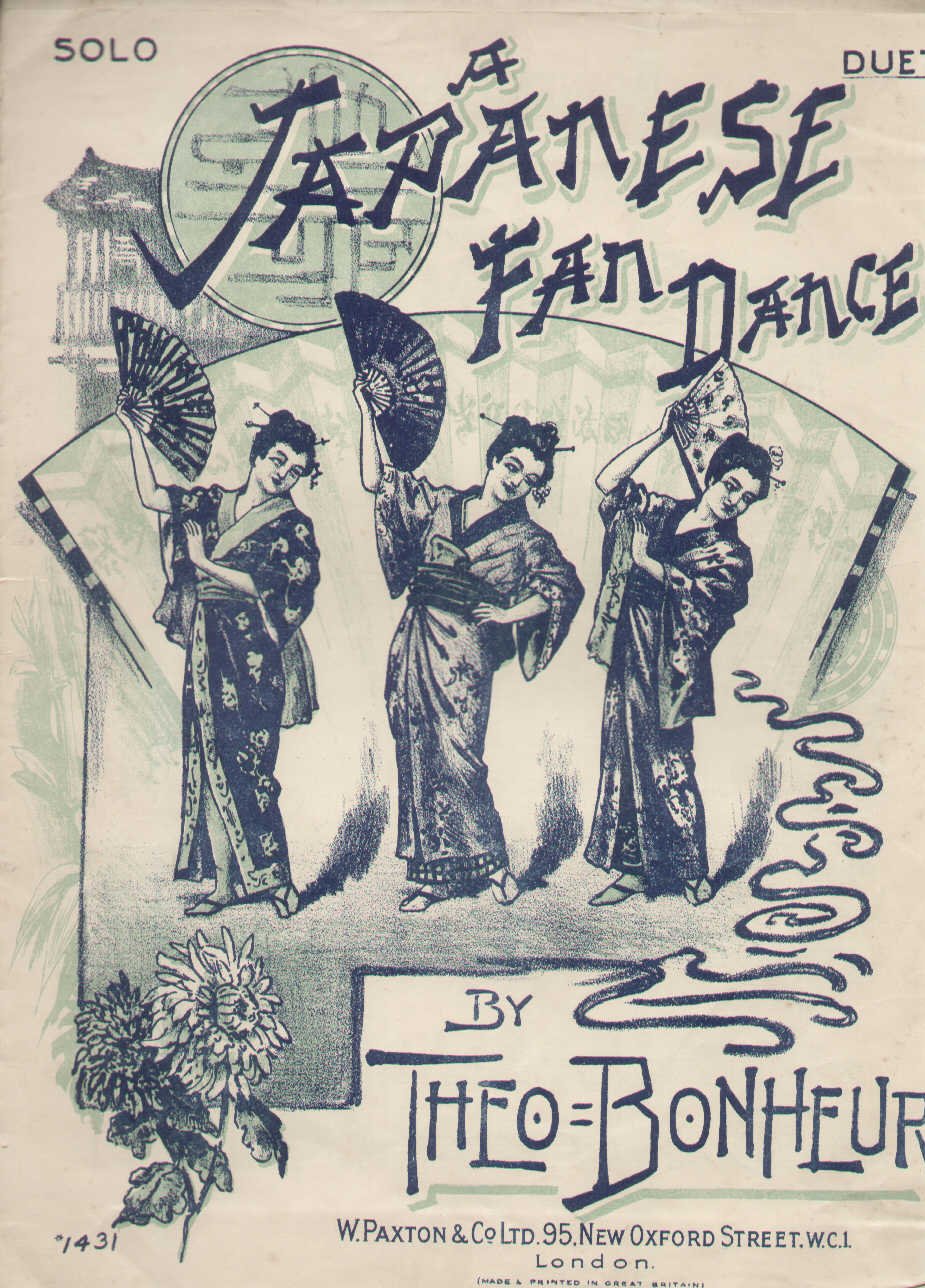 This will be my third, and probably final, piece explaining another explainable misunderstanding in the musical identity of Thomas Edward Bulch, who as we, and others, have said elsewhere DID frequently compose under pseudonyms, but not necessarily all of the ones that have been associated with him.

It is my belief now that Thomas Edward Bulch almost certainly didn’t use Theo Bonheur as a pseudonym for his own creations. As in the other cases discussed in my more recent scribblings, he quite possibly arranged Bonheur compositions for brass, but probably was not alone in this.

Though as with Glasgow’s ‘Carl Volti’, and London’s ‘Charles Le Thiere’, Theo Bonheur was indeed a pseudonym; for someone else altogether. It was probably used for the same reason as in the case of Volti and Le Thierre. Those two cannot have been the only Victorian era composers to have found that their music sold more successfully when it was accompanied by an exotic sounding foreign name.

Thomas’s grandson, Eric Tomkins, in his family history which centres on Thomas Bulch, provides a terrifically plausible theory passed down through the family as to how Thomas may have settled upon Theo Bonheur as a pseudonym. His father, Charles Tomkins, had explained the name was taken from “Th” from Thomas, “E” from Edward, with “o” added to make Theo and “B” from Bulch to begin the surname. The family believed that both Bulch and another used the pseudonym – resulting in it not being possible to tell which pieces were composed by either. But who was the other claimant to the name Theo Bonheur?

Arthur Charles Rawlings was born to Arthur Charles Rawlings senior and his wife Frances, in London, in Marylebone on 3rd May 1857. He was baptised on 1st January 1860 at Bryanston Square St Mary, Westminster.  He, and his brother Alfred William Rawlings, were taught to play piano by their father who was a piano tuner despite having been blind from birth. They also had an older sister Emily and younger brothers Halton and Ernest.

One account suggests that the children reportedly received attention from an orphanage run by Georgina Weldon, an acquaintance of the composer Charles Gounod, who spent some time in London. The extent to which both had an influence on the brothers is unknown.

The Rawlngs family lived at 15 then 57 East Street, Marylebone, London; then in the 1870s had moved to Casey Street.  By 1881 Charles, still was still living with his father but now at 1 Vincent Street in the Westminster area (an area that has been much redeveloped since). That year sees Charles (who preferred his middle name) listed as a Musical Composer at 23 years of age.

A newspaper article in The Graphic of Sat 29 Oct 1881 reveals to us that, initially, he, as with many others, tried to compose under his real name. “Miscellaneous. Felicia Hemans’ beautiful poem, “The Better Land,” has been set so often by various composers, that we are surprised to find a new musical frame in which to re-set this gem. Charles Rawlings has succeeded in producing a ballad of medium compass, which deserves a good place in the list of this popular poetess’s musical admirers (Messrs. Goddard and Co.).”  As most of his compositions were created under a pseudonym it seems that the characterisation of ‘Theo Bonheur’ was created at some point after this date.

The name Theo Bonheur itself first seems to appear in British newspapers in 1883, so that may have been the year in which Charles decided to switch to this identity. Incidentally this was the year before Thomas Bulch emigrated to Australia, so as a keen pianist he may well have seen, and become familiar with, works under that name.

The Graphic of 6th January 1883 tells of “”Concordia,” a grand march, for the organ, by Theo Bonheur, will prove a useful addition to the organists secular repertoire.” The Yorkshire Post of May that year expands the description to say “GRAND MARCH, “Concordia,” pour piano, par Theo Bonheur. London: Amos & Shuttleworth. – This march, which can be arranged either for the pianoforte or organ, does not belie its title of “grand.” The brief introduction is particularly striking. The march itself has the true martial ring in it, which is heightened at the con spirito movement, where there is a change of key to E flat, the return of the key to A flat being judiciously effected. “Concordia,” when known, should become popular. A word of warm commendation is due to the publishers for the boldness and clearness of the type, which is a credit to the firm.”

From available newspaper reports it appears as though the works of Theo Bonheur may have begun to be imported to Australia from around 1885 onwards, again giving Thomas Bulch, whom we should not forget was not long after that the proprietor of a music shop selling sheet music, as well as a pianist, to have seen and become familiar with the name. Surely having done so it would be unusual for him to have settled upon the same pseudonym. Initial references to Bonheur’s piano works in Australia include:

Knowing that Thomas Bulch worked for both Allan and Co, at least, if not others, it’s highly likely that he’d have seen the name and that might have dissuaded him from using it himself.

But we do, also, see soon after evidence of Theo Bonheur’s compositions being arranged by others to suit new formats. The New South Wales Advertiser of 15th May 1886 tells of a smoke concert of the Sydney Liedertafel at the Protestant Hall the previous Tuesday where it speaks of how “”The Clang of the Hammer” – which though composed as a song by Theo. Bonheur, owes much to Mr. Alfred J. Caldicott, who has arranged it for male voices – a dashing vigorous chorus, with a pretty love story to give sentiment to the music, caught the fancy of the audience and was redemanded and repeated.”

Then we start to see cases of the music being arranged for brass band, which seems unlikely to have been done by Rawlings/Bonheur himself. Interestingly the first case I have found of this is in the Ballarat Star of 5 Dec 1890 “Bulch’s Model Brass Band will play the following programme of music on the balcony of the North Grant Hotel. Bridge Street, this evening, commencing at 8 o’clock —March, “Montana” (Wallace); waltz, “Twilight Shadows” (R Smith); overture, “Golden Rose” (Richards), polka (tonguing), “Queen of Beauty” (Bulch); march, “ The Tournament” (Theo. Bonheur); waltz, “Summer Showers” (Keller); quadrille, “Ally Sloper” (Robinson); gallop, “ The Opossum Hunt” (Bulch).”

Bonheur’s piano march “The Tournament” as with his other pieces (see list at the foot of this article) was published by a London music publisher that had published other pieces by the same composer.  The key implication, so pivotal to the case that Thomas Bulch was not ‘Theo Bonheur’ is that as it is Bulch’s band playing the piece and he is still the bandmaster of this band until the following year, is that he was aware of Theo Bonheur as a composer and unlikely to have shown disrespect to a fellow composer by using the name himself.  It also makes it more possible (but not certain) that Bulch was the ‘arranger’ of the piece and thereby possible that hallmarks of his style and character of brass arrangement could be present in the piece.  That may well have been a reason the family associated Bulch and Bonheur. 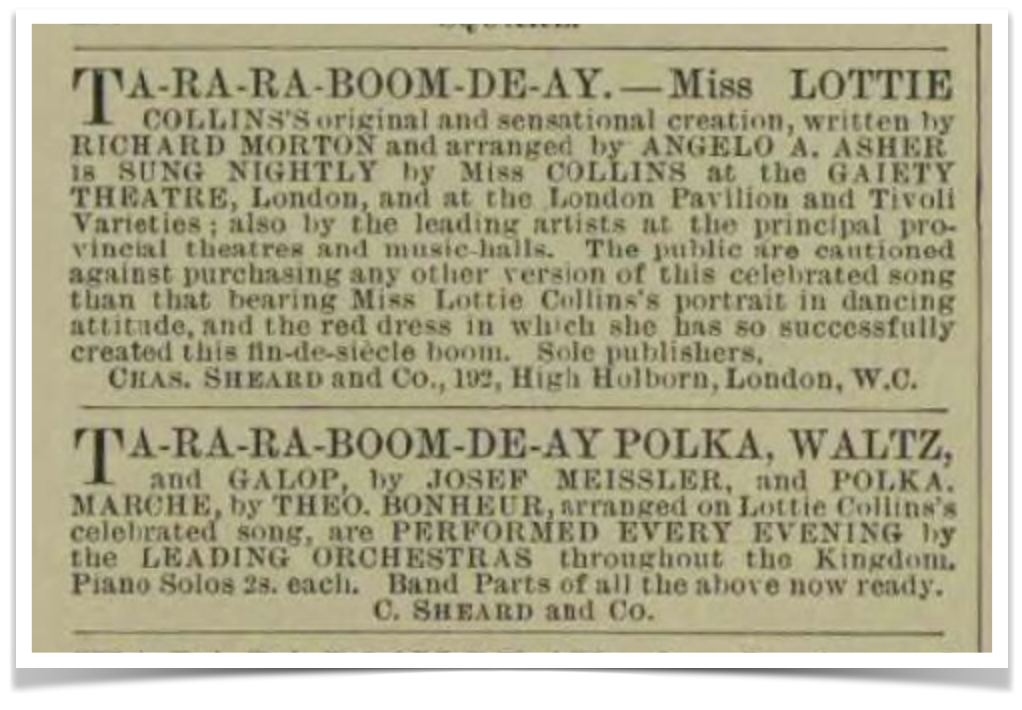 In 1893 the Bendigo Advertiser gives another example of the appearance of a brass arrangement of a Bonheur work. “The grandstand and lawn were never seen to better advantage than they were yesterday. The green, sward was like a carpet to walk upon, the flower beds looked their best and the grandstand, well filled with fashionably dressed ladies, presented a most attractive appearance. Northcott’s Bendigo Brass Band occupied their usual place on the lawn, and at intervals during the afternoon rendered the following selections in an artistic and finished style :—Quick March, “Ballarat” (T. E. Bulch); grand selection, “Gems of Ireland (H. Round): waltz, “Crème de La Creme” (J. Robinson); schottische, “Merry Moments” (Carl Albert); quadrille, “The Sailor Prince ” (H. Round) ; selection, “Babylonia” (Warwick Williams); waltz, Blumen Am Wege, “Flowers by the Wayside” (Karl B. Keller); quick march, ” The Repulse” (J. Robinson); selection, “II Barbiere” (Rossini); waltz, “When the Lights are Low” (Theo. Bonheur); galop, ” On the Wings of Love’ ‘(E. Newton); “God Save tho Queen.””

Back in Britain, by 1891 Charles Rawlings is seen to be living at 50 Crawford Road in an elegant town house in Islington with wife Eliza (formerly Elise Rose Garello, the daughter of a bootmaker from Torino, Italy that had set up business on Berners Street, Marylebone, whom he married at the end of 1881) and children Elsie, Josephine, Emily, Rosa, Nita and Theodore. The family also have a servant.

The family are joined by Marion and Alexander before 1901 when the children’s bling grandfather Charles, presumably retired, has moved back in with them aged 75 years. By this year they are living in Fortess Road in Kentish Town. You’ll notice that the youngest son there was given the name Theodore, for which of course ‘Theo’ is a shortened form, so in a way you could say the son was named after his father, or at least his father’s pseudonym.

Like Thomas Bulch, Arthur Charles Rawlings used other pseudonyms, some of which are believed to be Faulkner Brandon, Gordon Temple, Maurice Telma, Paul Perrier, Emerson James, Auguste Cons, Dennis Duprez, Jean Douste and Gilbert Loewe. Seemingly hundreds of tunes emerged through his pen, though few have prevailed. ‘Theo Bonheur appears to have composed exclusively for the piano but there is evidence of his pieces being arranged for other instrumentation and published by London publishing houses such as this advert from the Volunteer Service Despatch and Military Gazette of 26 August 1893 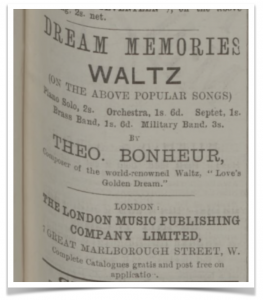 Charles, and ‘Theo’, died on 29th January 1919 at the Great Northern Hospital Middlesex. The Era of Wednesday 12 Feb 1919 included this brief notice “Mr. Charles Rawlings died recently at his residence in Pemberton Gardens, Upper Holloway, at the age of 62. For many years, under his professional name of Theo Bonheur, he was well known as a composer.” By the time of his death it appears he was not a wealthy man, leaving only £94 to his wife Elise and separately £40 to his daughter Nita

His wife, Elise Rose outlived him, surviving till 2 Jan 1928 where she passed away at her home in Streatham, Surrey, leaving her estate to daughters Josephine and Nita.

Across British and Australian library collections there are many works attributed to Bonheur. The Australian library collections include a great many London published works suggesting that they were imported quite freely. There are a few cases of works published in Australia, though not all exclusively there and of those there is evidence that they are part of a series with others being published in London – for example “Dance of the Goblins” and “Dance of the Sprites”. Bonheur’s compositions (for piano) include the following, though this is by no means an exclusive list – it is also worth noting that all these are sets of piano music, the libraries to not appear to hold band sets:

The following are a few of the references I have found to Theo Bonheur compositions being played by brass bands in Australia, Scotland and England. I see no real pattern in these or evidence that helps to determine whether any were arranged by Thomas Bulch.

When the Lights Are Low (waltz)