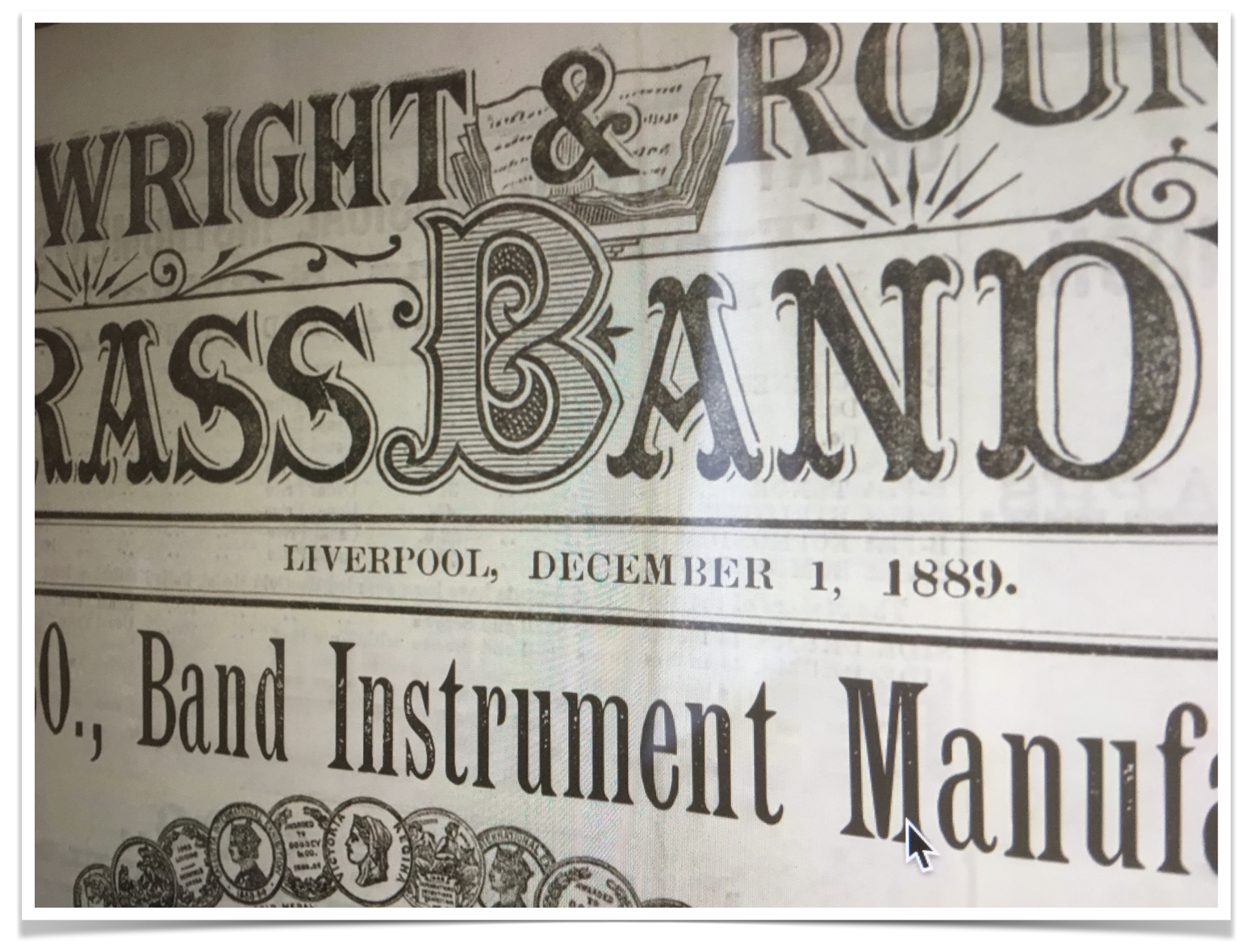 It’s been a good while since I posted an update so I thought it might be nice to do so just so that everyone knows this process hasn’t stalled and that we’re still working hard at assembling the lives of George Allan and Thomas Bulch.

When I’ve had spare moments in the last three months I’ve been mining an absolute treasure trove of old (new to me) information that has been digitised and put online by the University of Salford; specifically the digitised archive of Wright & Round’s Brass Band News from the archive collection that was donated to them by Roy Newsome.

Roy Newsome truly understood and appreciated the value of this material to future researchers, and was one of the foremost writers on the history of the brass band movement and culture in the UK prior to his passing.

One of the challenges in the process of assembling the life story of a Victorian composer is that at the time things were happening few people thought that everyday items like newspapers for bandsmen would have any worth or relevance after they were read. It wasn’t just the newspapers. All the day to day artefacts or papers that would have passed through George or Thomas’s hands during their lifetimes. All the letters and correspondence between them and their publishers or printers or family members – possibly even between the two of them. In many cases a lot of the music they produced. Little value would ever have been attributed to any of it.

When George and Thomas passed away, their families would doubtless have had a good old fashioned clear out. Photographs, mementoes they may have cherished but of little personal relevance to anyone else, even sons and daughters, all disposed of. So that when someone almost a century later takes an interest they are feeding upon scraps – unless a person with foresight like Roy Newsome thinks ahead, thinking also no doubt about what interests him, and secures some of that information to be investigated later.

Thus we are fortunate enough to have access to decades of historic Brass Band News (which you can access here). British Bandsman also maintains an archive, but the beauty of this Brass band News archive is that it’s available free of charge to all those who need to read it. I suspect that if the publishers were still a going concern (the name was bought out long ago by other music publishers) then there would be a paywall.

I’ve found a great deal among those yellowed pages. You have to sift through with a comb, perusing each page, though after a while you start to see patterns and know instinctively where to look for news of what you are interested in. The pages revealed elements of how and when George Allan started to emerge as a publisher in his own right after the death of his regular publishing partner Thomas Albert Haigh of Hull and retirement of Fred Richardson of Sibsey, Boston, Lincs (who sold his business to Wright and Round).

We have discovered how Thomas Bulch tried, with varying degrees of success, to remain relevant to the British brass band fraternity despite having relocated to Australia – by sending news of his contest successes that could be read back at and advertising his own brass journal ventures. In this latter the Brass Band News pages reveal more about how what we already knew about his father acting as his British sales agent was supposed to work. Ultimately trying to maintain connections with Britain weren’t as helpful as Thomas might have hoped, but for a researcher trying to unpick and unpack his life story and add to the work previously conducted by his own Grand-son its is invaluable to be able to read this.

On George Allan I’ve struck a rich seam of information – a number of consecutive issues that contain adverts for Haigh’s Amateur Brass Band Journals, many of which include advertisements for George Allan pieces in each issue, many of which we hadn’t seen so far.

They are definitely our George – some of them we had seen before, and I’m quite certain that Haigh didn’t have 2 or more Geo. Allans composing for him. This has enabled me to add some definite year of publication dates.
There are a few really exciting titles in there that shed a little more light on things

Another I found was called “Willoughby” – which I thought was odd, but seemed familiar…. then I remembered that he married Elizabeth Willoughby, and sure enough the piece would have been published the year after they married. I found this discovery very moving.

There are a few more with sea connections “Won From the Waves”, “Tidal Wave” which gets me thinking more about my theory of many pieces being named after ships – yet there are plenty that seem to have nautical connections.

There is one ‘mystery piece’ we have found – where someone mysteriously snipped away part of the page (including the title) so if you have any idea what this might be, do let us know. This bugged me significantly if only because the name revealed by the snipping process was my own surname – what a coincidence.

What’s been really exciting to see is a few of his Christmas Hymns coming out. His own adverts for the Popular Brass Band Journal also in the Brass Band News annually mention ‘Christmas numbers’ but he doesn’t go on to explain much about them or give those pieces names. Hence they remain a mystery and obscured from our .

Plus – we now have more evidence of him producing pieces for Haigh’s String Band Journal and Haigh’s Fife & Drum Band Journal through the 1880s and 1890s – so he wasn’t a one trick pony as a composer and was more like Thomas Bulch in terms of being multi-instrumental composers.

It would be quite something to add some of that material to our collection so that we could see how proficiently he rendered string or fife compositions.

Haigh only advertised regularly in detail in BBN for a handful of years, then the ads seem to dry up even though we know that the journal went on. Other journal ads dry up or shrink around the same period which has me wondering if Wright & Round upped their prices or placed restrictions, perhaps because the ads were succeeding in drawing people away from buying their own products that were also advertised. That has me thinking though that George may well have been way more prolific than we thought at first and that many of the titles we have found but are low in confidence on may well be genuine.

There are some such as “Tip Top” that I previously had low confidence in being genuine as we’ve not seen them or a verifiable advert – but they could be higher as I have seen George describe one of his own marches in his own ad as “tip-top’ so it’s a term he might have used.

I’ve also been finding pieces advertised in journals that were composed by W J Allen but none of them with ones we thought were our George Allan. Allen and Allan’s composition titles feel very different anyway. I have ruled one out that I had in our list but I hadn’t put on the list on the website – which was “Convention City” – the title never looked right for a Shildon George Allan piece and in the it turned out to be an American fellow called Allan.

If I’ve learned anything from this (and I haven’t worked my way through all of the issues quite yet) it’s that just when you think you’re running out of information or have drained the well dry, there are likely to be new pieces of information coming in. Oh, and Roy Newsome, THANK YOU wherever you are.