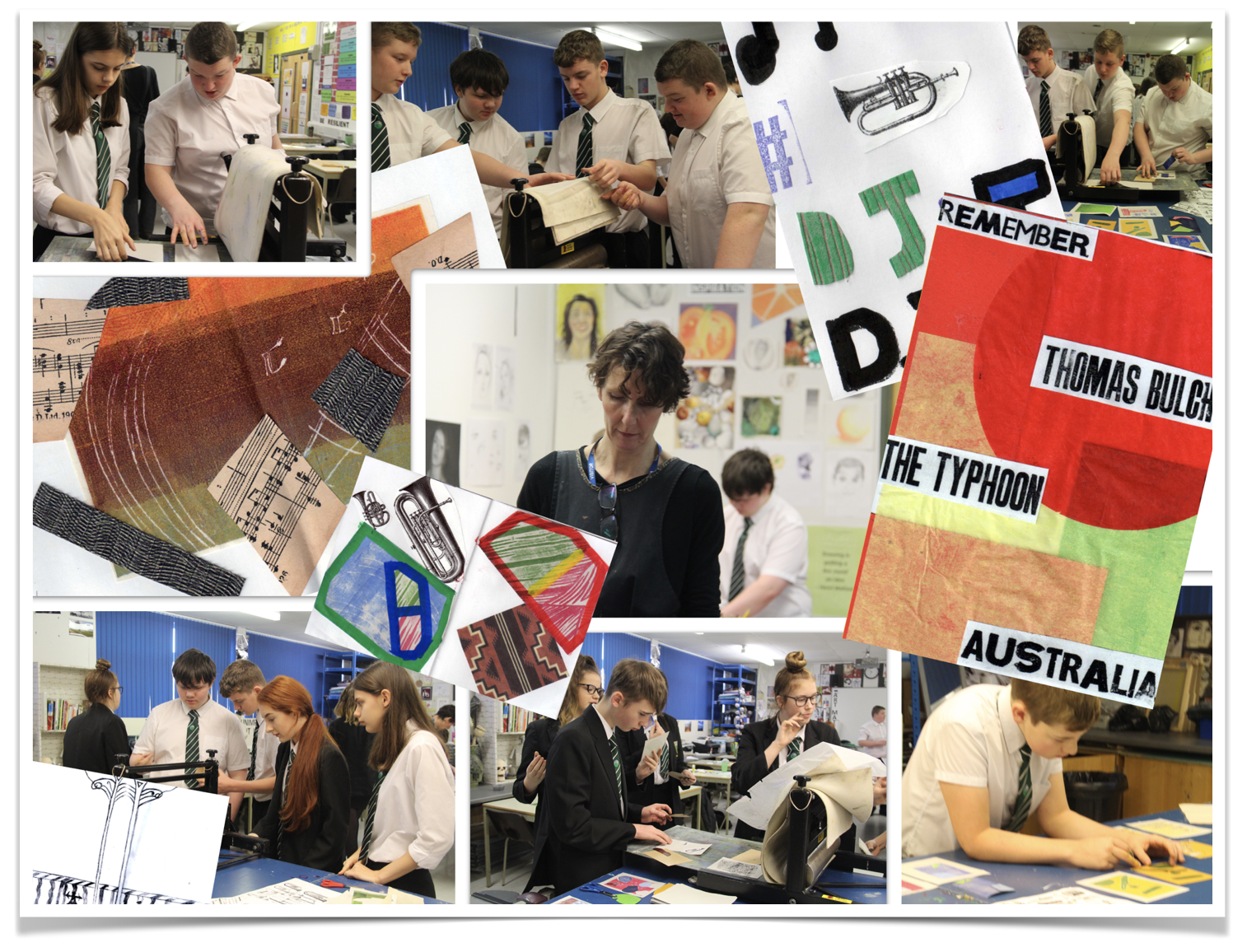 For this post, we’re dipping back out of the past and into the present to give you an update on a partnership initiative the Friends of The Wizard and The Typhoon are involved in with Greenfield Community College, the school that now provides education for many of the young people here in Shildon as well as surrounding areas.

The project at the school aptly titled The Wizard and The Typhoon is a creative one engaging the students in different creative arts as they explore the musical heritage of Shildon through the contribution of innovative and influential Shildon born Victorian brass music composers George Allan and Thomas Edward Bulch. The project, supported by Northern Heartlands has engaged professional artists and musicians to work with the students as they explore the story, consider it’s relevance to their lives today, and find ways to express their discoveries and learning through art and music.

For this first phase, the project has engaged artist Theresa Easton who, among other things, is an excellent facilitator and tutor in exploring artistic printing techniques. Though at face value you might consider this a surprising artistic technique to explore in connection with a project that has two people connected with music at the heart of it, it’s actually very relevant to the story of Thomas Edward Bulch and George Allan.

Both bandmaster composers self-published their own music during their lifetimes. Thomas produced a number of brass band journals (regular publications to subscribing bands that each included new pieces of music at regular intervals) during his lifetime. He would have known about and understood the importance of print, and the quality of printed music. He also published a brass band newspaper called the Intercolonial Brass Band News for a time. What’s more, he would have understood the importance of strong visual imagery in connection with music. Thomas also composed music for the piano, including pieces like “The Jubilee March”, “The Bombardment of Port Arthur” and waltzes like “Myrine” and “Noralla”, which he named by connecting parts of the names of members of his family. He knew that for a piece of piano music to appeal to the buyer in a shop a good visual printed design or image on the front was key.

George Allan also published his own band journal “Popular Brass Band Journal”, so he too understood the importance of the printing art.

Both composers initially had their very first music printed and published by the same music publisher, a Mr Thomas Albert Haigh of Hull. Haigh had his own print works in a building next door to the shop from where he operated his music publishing business. Later both George and Thomas had their music published by other companies who would send the music to Leipzig in Germany to be printed. Incredibly, though Thomas and George were by this time both at opposite ends of the world writing their music, George being in Shildon and Thomas in Australia, the music printing for both would be done in buildings on opposite sides of the same street in Leipzig.

Last year, I went on a research trip to Leipzig to see for myself and was astounded by how close the Brandstetter works (where George’s music was sent to be printed) and the Röder works (where Thomas’s music was sent) were to each other. It was also an opportunity for me to visit Leipzig’s famous museum of the printed arts where I received a detailed explanation and demonstration of the complex techniques of printing music.

There were two approached to printing music in the lifetimes of Allan and Bulch, and both were used in the printing of their music. One approach is to use a typeset that reflected musical notation – something that would be quite expensive and specialist to produce and quite intricate to assemble, though the results are spectacular giving clarity of print that was really very new and unsurpassed at the time. The other approach was to etch the musical notes and lines onto a sheet of mixed lead and tin using a collection of very specialist tools. Again this required a great deal of patience, training and extreme attention to detail.

The outbreak of the First World War put an end to the process of composers sending their handwritten manuscript to Germany to be printed by the leading print houses there. George and Thomas would have had to find means closer to home, and possibly been more involved.

Though, on account of the specialist equipment needed, it wouldn’t be practical to demonstrate these techniques in detail to the students at Greenfield community college, and possibly nowhere near as much fun in the time the project has, there is still a great deal to explore in other printing techniques that are far more accessible. What’s more, as music printing has become more a digital skill, there wouldn’t be much value in doing so. Creativity, however, is never outdated, so Theresa has been facilitating the group in expressing something closer to art in the purer sense that captured the young people’s thoughts and sentiments in thinking about what happened to George and Thomas, whether they deserve to be remembered more than they are today, and how what happened to them might give insights into how students could exploit equivalent opportunities today.

There are some really simple basic principles in the Wizard and Typhoon story that could well be as true today as it was between the 1860s and 1930 when Allan and Bulch lived their lives. For example, how music and art can bring together a community that is so new that it has not yet had time to establish strong ties of kinship; or the importance of passing on certain skills like the basics of music or the principles of printing from one generation to the next, as Thomas’s grandfather did to his sons, and to Thomas and George who then went on to pass it down to the next generation; and how through that passing of knowledge something lives on from each generation before it.

One of the most important threads in the story to me is how these clever young men found ways to turn music, which didn’t really require a great financial investment on their part to learn from their families, into an opportunity to do so many things: to do good for the poor in the community; to enable travel to far off places; to make their own lives more comfortable; to raise their own profile but also to find pure enjoyment in art. Also, one of the best things to me about the story is that you can see there are different ways to go about achieving the same thing. You can be outgoing, bold and adventurous like Thomas, or quieter and more introverted like George seems to have been.

One other key message from The Wizard and The Typhoon and the general story of the brass band movement as a whole is that when people work together greater things happen than sometimes can be achieved as individuals. In brass banding terms it is when all the sounds of the different individual instruments come together; some of the parts of which sound plain odd on their own, and suddenly this wonderful soundscape happens where everything complements the other parts and there can be so much going on at once producing melody and harmony and rhythm that though the overall effect is sensational it can be tricky to dissect exactly what is happening where.

In the same way, the Greenfield Community College students are, in this project collaborating to bring their printed creations together into the final format of a ‘zine’ – a printed document that collates all of their impressions and thoughts manifested into a visual landscape that you can pick up and navigate at leisure, and revisit whenever you choose.

I honestly thing George Allan and Thomas Edward Bulch would have both been touched and moved if they knew that 90 years after they left this life there would be a group of young people from the town and area that they were both born who were discussing what they thought of their story and putting their thoughts and feelings about it into print to share with people. I think it would be equally incredible if other young people 90 years from now were to find something about this generation of young people to discuss and share. Given the opportunities available to the young now in arts, technology, science or literature, what wonderful things might each and any of them achieve in their lifetimes than those future people might marvel over?

The next stage of the project will move into music as musician, singer and songwriter Elizabeth Corney will become involved with music students at the school. It’ll not be just about the tremendous contribution that Thomas Bulch and George Allan made to music, but will help the students to explore their own skills and creativity to realise that they too can achieve.

Toward the end of the project, a final phase will seek to share what the young people have learned and produced with their, and our, community and families. I have a feeling we’re going to be very proud of them.

The Friends of The Wizard and The Typhoon are extremely appreciative of not only the contribution by the tutor facilitators and Greenfield Community College and its arts staff but particularly the support of Northern Heartlands, one of sixteen Great Place Schemes in England, funded by National Lottery Heritage Fund and Arts Council England.

Photographs published here have been used with permission from Greenfield Community College.