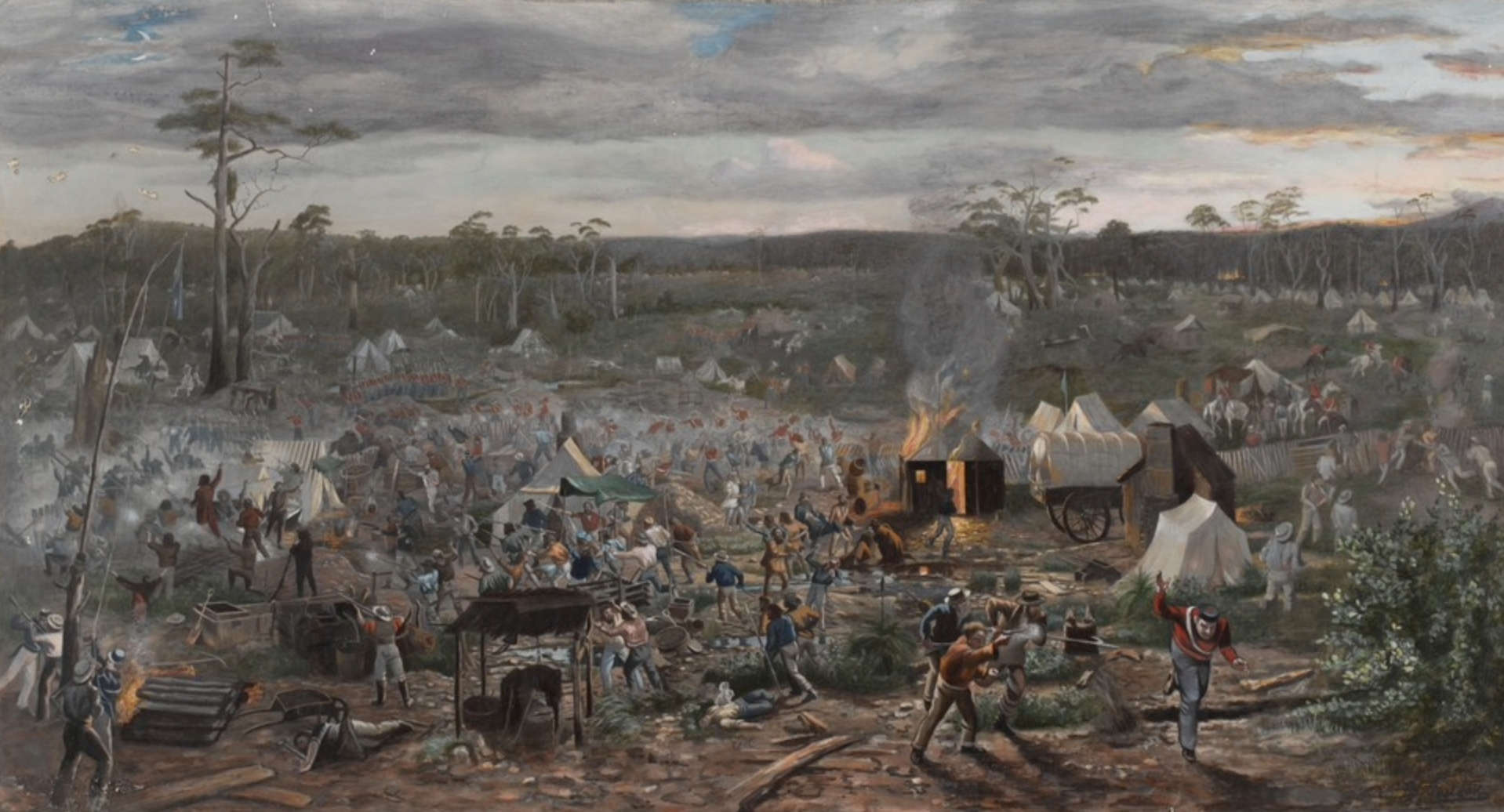 If I were to exclaim “Eureka!” you’d be forgiven for thinking I’d discovered something – after all it’s an expression probably best associated with Archimedes discovery that if he plopped himself in a bath tub filled to the brim with water then, lo and behold, all of the water that spilled over the side would equate in volume to the spec occupied by his entire body (assuming it was deep enough for his head to bob under the surface and he didn’t splash about too much. I suppose that, even though this isn’t about Archimedes and his discoveries, it is still about a discovery of sorts, and something else.

Digging around in our archive of music by Tom Bulch and George Allan I was looking for something we’d not yet explored – by which I mean we’d not had an opportunity to hear what it sounds like – and after short listing a few that had attracted me for a while, my eye settled on something else entirely. Tom Bulch’s contest march “Battle of Eureka”.

You can hear the piece for yourself at the foot of this article, but first I’d like to look into what it is a little more.

Lately I’ve been wanting to veer away from the marches, to look into some of the less martial gems – which in part is why I chose the mazurka “Alice Bertha” last time. I’d really been intending to give an airing to one of George Allan’s fantasias or overtures – something like “Gabriani” which was hugely popular in its day but never heard now. But the thing about “Battle of Eureka” is that rather like the piano accompanied song “Remember Majuba” that we explored last year, there is a good historical inspiration behind it.

You see, the word Eureka, in Australia, is associated with one of the pivotal events of the gold-rush era, and one which defined a shift in attitudes to colonialism.

Those following our work, or familiar with the life of Tom Bulch, will know that after his emigration from Britain in 1884, Tom settled in the area around Ballarat, before making a name for himself in that city. Ballarat was a city very much at the heart of the Australian gold mining culture – hence how Tom was able to secure a job for his brother Frank, a former south west Durham coal miner, in the gold mine that his father in law managed.

The story of the Eureka Rebellion predates Tom’s arrival in Australia by three decades, taking place in 1854. It was the culmination of a campaign of civil disobedience in protest at the perceived unfairness of the cost of a mining license, which was levied by the governor on all prospectors. The government had, in 1852, tripled the cost of the license from £1 to £3 per month. The governor’s men would regularly conduct hunts for miners that were unlicensed. In addition new laws were passed prohibiting the sale of alcohol in the goldfields, further incensing the working class miners who flouted the rules however they could. Gradually the miners accumulated arms in anticipation of clashes.

In October 1854, a Scottish gold miner named James Scobie was found murdered, with the common suspicion being that the landlord of a hotel had committed the act. That landlord, a man named Bentley, was not charged, and the miners felt it was because of his associations with the police and magistrates. The miners took retribution and burned down his hotel, resulting in a company of soldiers being dispatched. Though Bentley was eventually charged with manslaughter, the miners that burned the hotel were also arrested and charged.

In November miners convened and formed the Ballarat Reform League to campaign for change. They adopted the first five of the six principles of Chartism (some of the miners having been Chartists in Britain before emigrating), and pledged to campaign for secession from the United Kingdom if the situation did not improve.

An event in late November, wherein eight unlicensed miners were arrested, saw a shift to a more aggressive stance with a paramilitary style organisation being created and a new ‘Eureka’ Australian flag being designed to be a rallying symbol. The famed ‘stockade’ was more a makeshift enclosure of upturned carts and suchlike hastily created and reportedly of little defensive value.

The British Empire’s Governor for the territory of Victoria reinforced the police with soldiers from the 12th and 40th Foot Regiments, and then on the 3rd December a battle ensued. As you’d expect these ‘strong-arm’ tactics resulted in a quick and one-sided conflict with the miners hopelessly outclassed. The mixed force of soldiers and police lost six of their number, but many more miners were killed or wounded, and the Eureka flag was torn down. Many miners were taken into custody and thirteen were tried for treason, but later acquitted.

The event was politically inconclusive, but entered indelibly into the consciousness of the territory. In 1856, a ‘digger’s’ memorial was erected in the Ballarat Cemetery where the miners killed in the clash were buried. In July 1884, just a couple of months after Tom Bulch’s arrival in Australia, and thirty years after the Eureka incident, a movement began to have a permanent monument erected to have it remembered. Having moved initially to the gold-mining community of Creswick, this may have become one of the first things young Tom became aware of about his new homeland.

According to a site called Eurekapedia, the Eureka Monument was completed in 1889, incorporating a stone obelisk and four 60 pound cannon (which have no connection to the event).

Tom’s march “Battle of Eureka,” if not written for that monument completion, was certainly inspired by it. It’s no coincidence that the first report we have seen of it being played, by Tom’s own Bulch’s Model Band on 7th March 1890 at the Eastern Oval in Ballarat. It may well have been played before then but not reported in the press.

Tom published the piece in his new fledgling Intercolonial Brass and Military Band Journal as piece number 7. By mid 1890 was being played by Sam Lewins’s Bathurst District Band and other bands in Benalla and Albury who had bought the journal. The thing is though that if you look at the pages of the journal, you will see that Tom had the journal printed for him by C G Roder in Leipzig, Germany, then the leading music print city in the world. In that day and age this would have meant Tom having to send his hand written manuscript by post (travelling by steamer, rail and eventually foot or bicycle), wait for the printers there to make up the plates for each part (the uniform quality of the print suggests that these were composed at the print works using a musical type-set of a kind that I saw when I visited the print museum in Leipzig rather than being etched) and to print and collate them all and send them back. This may or may not have involved the print works sending an initial ‘proof copy’ to check for quality. All of this travel would have taken some significant amount of time – which suggests that it’s very likely that “Battle of Eureka” was composed in 1889, the year the Eureka monument was completed.

It was a ‘contest march’, being one with sufficient complexity to test a band’s ability, and with featuring sections for most of the principal instruments of the brass band. Evidence suggests that it was one of Tom’s most successful and long lived pieces of music, not just through being what sounds like a good piece of march music, but also most likely through its association with the event that was by then part of the patriotic lore of Australia. There is plenty of evidence was played by bands across almost all the Australian states right up to the year of Tom’s death in 1930, and most likely beyond (though we’ve not searched for references after 1930 yet).

Tom always did seem to have had a canny sense of marketing, in that many of his pieces were titled to be reminiscent of places or events, most likely in a bid to form a more emotional attachment to the music. Given that he was trying to make a living from music, this was an important intuitive skill, and no doubt served him well much of the time.

What’s perhaps interesting to English readers is that in 1892 and 1893 we also see cases of the march being played back in the north of England where Tom’s family were trying to act as his sales agents for his band journals. The arrangement doesn’t seem to have lasted long, but we do know that the North Eastern Railway Servants Band played the march at Seaton Carew on the 16th Sept 1892 and the Danemort Brass Band played it in Ecclesfield on the 5th August 1893.

Let’s then have a listen to the music, picturing the scene at Eureka in 1854 or imagining ourselves at the Eureka Monument in 1889 or 1890. Enjoy!